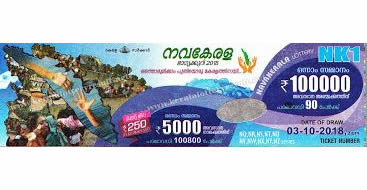 The Nava Kerala lottery, or 'Ashwas' Lotto, has been launched to aid the rebuilding of Kerala after the destruction brought on by recent flooding that has devastated the region.  Finance Minister for Kerala, Mr Thomas Isaac, explained to the media that the lottery has been created to help with rebuilding efforts in the state and tickets will be sold at a cost of Rs 250 each from September 3rd through until October 3rd. There will be 90 main prizes of Rs 1 lakh each and 108,000 smaller prizes of Rs 5,000 each. All funding raised through the sale of tickets will go directly into the Chief Minister’s Distress Relief Fund (CMDRF).

Minister Thomas said “The government is expecting a net income of Rs 90 crore from the sale of tickets. The commission for the seller is 25%. NGO’s, residents' associations and political organisations can sell the tickets, and temporary agencies will be given to all interested, free of cost.”

According to one source “The target of this special lottery is to raise Rs 100 crore, which will be the net profit for the state government after meeting all expenses of this special lottery, if all the tickets are sold." When asked about the impact of the flooding on the area, Kerala Chief Minister Pinarayi Vijayan said that “To put it in a nutshell, the size of the loss caused by the calamity is equal to the size of the annual plan the state has chalked out for 2018-2019.”

The Kerala State Lottery is also estimated to have lost around Rs 2.6 crore when the regular Kerala draws from August 23rd-29th were cancelled due to poor ticket sales as a result of the floods.

Publicity Officer, Anil Bhasker said, “We cancelled six lotteries and postponed draws of seven others as ticket sales were badly hit due to floods"

Even Hollywood legend Leonardo DiCaprio has retweeted a New York Times article about this crisis on his official Twitter page, which will hopefully help in bringing global attention to the region, as it is estimated that there could be an estimated economic loss of more than Rs 20,000 crore after all damages are taken into account.

Tragically, some 370 local people have lost their lives since May 29th, when unprecedented monsoon rains hit the state. Another one million people have also been forced into temporary shelters provided by relief camps, so any funding raised through this lottery should hopefully find its way into providing basic needs and services urgently required by affected residents of Kerala in this time of hardship.